Roundtable on “International Day Against Fascism and Anti-Semitism”

Organizers: Assembly of Nationalities of Ukraine, All-Ukrainian Charitable Fund “To You” (ACF 2U) and Jewish Forum of Ukraine (JFU)

November 9, 1938 became known as “Kristallnacht.”
During general pogrom in Germany more than 300 synagogues and Jewish homes were burned and destroyed. More than 90 German Jews were killed. According to the UN resolution, this day is celebrated worldwide as a day against fascism, xenophobia and anti-Semitism.
Almost 80 years have passed since those days but the threat of fascism and various forms of national intolerance still exists.

All those present stated that today there is no state anti-Semitism in Ukraine, but unfortunately, we still face it at the household level.

“We had taken a fantastic step forward during this year – from the division of Ukrainians on Ukrainian and Russian speakers to multiethnic, multilingual, multicultural, political modern nation. Our radical right parties took at the recent elections to the parliament 6.5% all together and did not manage to become a part of the new Supreme Council. We can be proud that the country created conditions for all nations”, said a government commissioner for ethnonational policy Gennady Druzenko.

“First of all we have to ask ourselves how to fight against anti-Semitic tendencies. And in this case education goes first”, pointed out Anka Feldhusen, Minister Counselor, Permanent Deputy Ambassador Federal Republic of Germany Ukraine.

Itzhak Carmel Kagan, Deputy Head of Mission of the Embassy of the State of Israel to Ukraine said that it is rather important to remember our past, but we need to talk about current issues. In today’s world, Israel is automatically blamed for everything. In the past 5 years at the Human Rights Committee 90% of all resolutions were passed in regard Israel. We need to be very careful about things that are happening in the world. We must be ready to defend ourselves. 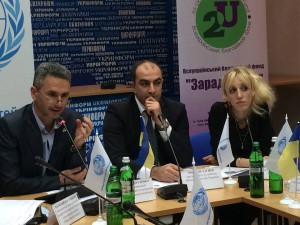 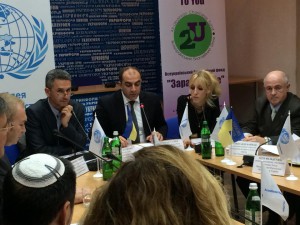 “The murder of people is horrible, murder on a national basis is even worse. This is what happened in Kristallnacht. Different nations became victims of xenophobia and fascism. Now Ukrainian people suffer from this. The information is distorted and we know many examples. We are to give a clear assessment of what is happening and to make recommendations to the authorities. We should be united in the fight against all forms of fascism and xenophobia”, said Head of the Assembly of Nationalities of Ukraine Rovshan Tagiev.

ACF 2U Board Chair Julia Goldenberg emphasized: “Information war is in progress. There are numerous manipulations in regard to fascism, anti-Semitism, xenophobia… We should be very careful not to become victims of this “game” and not to cross the red line. Moreover, history teaches us that, unfortunately, in a variety of troubles, especially economic ones, is often blamed Jews are often blamed. I do hope that Ukrainian civil society has reached a level where it does not happen. Recent elections give us such hope”.

According to the chairman of the Synodal Information Department of the UOC-MP, Archpriest Georgy Kovalenko, irresponsible use of terms like “fascism” and “Nazism” may just cause incitement to ethnic conflicts, as well as manifestations of anti-Semitism.
“We live in a situation where the irresponsible use of terms such as fascism, Nazism just lead to incitement of ethnic, interdenominational or other forms of hatred, said Archpriest.

In the frames of the round tables participants received monitoring of anti-Semitism in Ukraine in the period of January – October, 2014 worked out by JFU.

By results of the Round Table it was decided to send a collective appeal to the President of Ukraine, the Verkhovna Rada and other government and non-governmental institutions with practical suggestions for prevention of fascism, anti-Semitism, xenophobia, racial or national intolerance in Ukraine.