Round Table: “March of Peace and Concord: the theory and practice of development of inter-ethnic and inter-religious dialogue; pilgrimage march with representatives of different religions and nations as a form of inter-faith and international cooperation”

Participants: Julia Goldenberg – All-Ukrainian Charitable Fund “To You” Board Chair (ACF 2U); Arkadiy Monastyrskiy – Jewish Forum of Ukraine President; Ruslan Abdulin – Executive Director of March of Peace and Concord; Chairman of Ethnocultural Public Association of Tatars and Bashkirs of m.Shymkent “Ak Bars”, member of Presidium of Association of Tatars and Bashkirs of Kazakhstan. 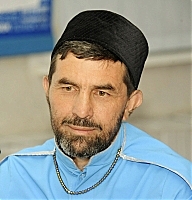 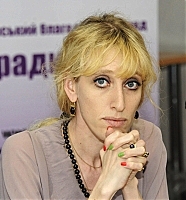 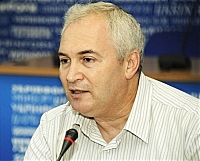 On June 20 at 13.15 at press-center of Ukrainian the press center of Ukrainian national information agency round table “March of Peace and Concord: the theory and practice of development of inter-ethnic and inter-religious dialogue; pilgrimage march with representatives of different religions and nations as a form of inter-faith and international cooperation” took place. Organizers – All-Ukrainian Charitable Fund “To You” in partnership with the Assembly of Nationalities of Ukraine due to the support of CIVICUS.
March of Peace and Concord, which started in Kazakhstan and would end in Greece, arrived to Ukraine. “March participants would share the true information about current situation in Ukraine along their route”, executive Director of March of Peace and Concord Ruslan Abdulin emphasized.
“Following the end of March of Peace all the way back we are going to hold meetings and round tables. We truly, openly, clearly and unequivocally are going to talk about things our eyes will see during these 14 days, we will go by foot through south of Ukraine. We will bring our thoughts to the public, “- said Ruslan Abdullin.
He noted that the draft of the March (it’s going to be the 5th March already) was worked out 2 years ago and would cover the territory of six countries. The change of the situation in Ukraine has not scared participants; they do not want to exclude Ukraine from this route. On June 23 the walk would be started from Odessa & will be ended on August 7 in Salonika, Greece.

We are public organization and we offer people no political slogans, our slogan is peace between nations, peace between religions. And today, more than ever, Ukraine wants to hear these words. We want to appeal to religious people, to those who cannot remain indifferent under such tough situation. We want to offer our support in terms of words, deeds or prayer”- said Abdullin.

Round table participants – representatives of various religions and nationalities – pointed out the importance of experience of this movement to renew peace in our country and to inform Russian public about the real situation in Ukraine.

“We do understand that the roots of the current situation in Ukraine are not in inter-ethnic or inter-religious contradictions. Such tolerance level is not always inherent in Europe. But we all need to think about how to use these discussions to achieve peace in Ukraine. Coincidentally, two hours ago, President Poroshenko presented Peaceful Plan. And we need to think how we can participate in implementation of this plan to find concrete solutions”, said Marius Yanukonis, Deputy Ambassador of Lithuania to Ukraine.

President of the Congress of the Caucasian Peoples of Ukraine Pasha Mamedov -Ilisuyskyy said that Russia needs to receive objective information about things in Ukraine – a country where representatives of all nationalities united in the name of the objectives and interests of the Ukrainian people, that Ukraine is an example of a tolerant society for many of its neighbors.
“Ukraine has always been rather tolerant country. When your March through the territory of Ukraine is over, I do want you to realize how hospitable and friendly our people are regardless of their ethnic origin. There are many more things that unite us than divide. And it is very painful for us to observe what is going on with Russians”, said Julia Goldenberg, ACF 2U Board Chair. 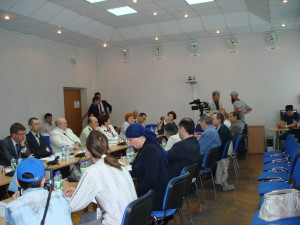 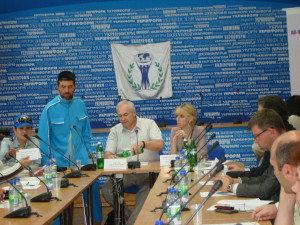 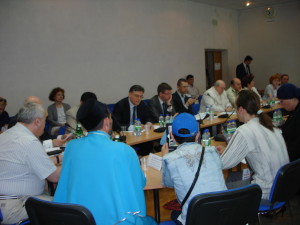 President of the Ukrainian Tatar home “Tugan Tel” Peter Sharafutdinov said that Ruslan Abdullin presented his March of Peace during events at the Maidan. Sharafutdinov also made a proposal following March of Peace to initiate creation of the World Organization of All Faiths.