Round table “Ukraine is different – Ukraine is united: the role of ethnic minorities, their status in the country today.” Organizer – All-Ukrainian Charitable Fund “To You” (ACF 2U)

On April 17 at 14.00 round table “Ukraine is different – Ukraine is united: the role of ethnic minorities, their status in the country today” took place at the press center of Ukrainian national information agency (conference room on the 2nd floor ) organized by the All-Ukrainian Charitable Fund “To You” due to the support of CIVICUS.
Facilitators: Rovshan Tagiyev – President of the Assembly of Nationalities of Ukraine; Yulia Goldenberg – Chairman of the All-Ukrainian Charitable Fund “To You”; Arkadiy Monastyrskiy – President of the Jewish Forum of Ukraine . 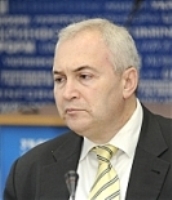 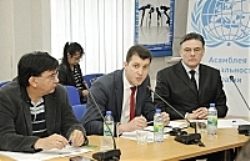 Leaders of various NGOs representing different national and ethnic groups of Ukraine adopted an appeal to the United Nations, U.S. President Barack Obama and Russian President Vladimir Putin in respect to the recent events in our country.
This following appeal was adopted in the course of the round table.
In particular it is stated: Ukraine used to be, Ukraine is, and we believe Ukraine will be peaceful and tolerant country for more than 140 ethnic groups that live on its territory; in the course of the 23 year independence of Ukraine we have never faced any language or religious challenges.
“We associate our future and future of our children with untied unitary Ukraine. Based on the aforementioned we request to stop any speculation and innuendo on national ground and to exert maximum efforts to stabilize the situation in the country”.
Participants of the round table organized by the ACF 2U and Assembly of Nationalities of Ukraine emphasized that on their side, together with other international humanitarian organizations they are ready to do everything possible to preserve peace and tolerance in united unitary Ukraine.